Another month has passed. It goes so quickly. On Saturday this peanut turned four months old. This month has been a good one. We took Peyton into the chiropractor and he's like an entirely new baby. So much happier and is sleeping better! He is smiling so much and loves to talk. 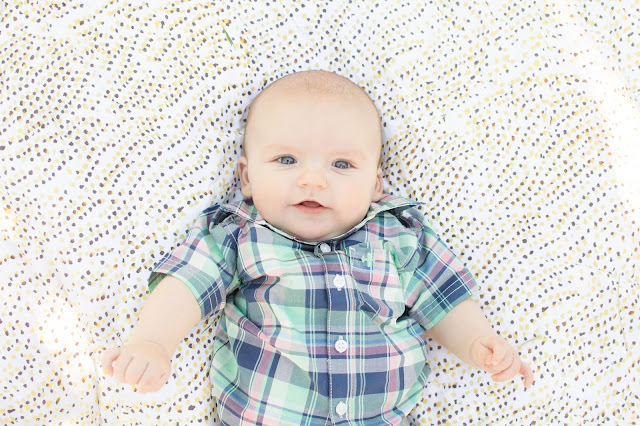 Peyton doesn't go for his checkup until next week.

What's new...
Both boys are experiencing allergies. Not fun but thank goodness for Frida! It works wonders. He is wearing size 2 diaper and 6 month clothes. He has a lot of hair coming in on the top of his head. It's like it came in overnight. He is giggling. His favorite is to be "tossed" (he never actually leaves our hands) into the air! Cue the giggles. 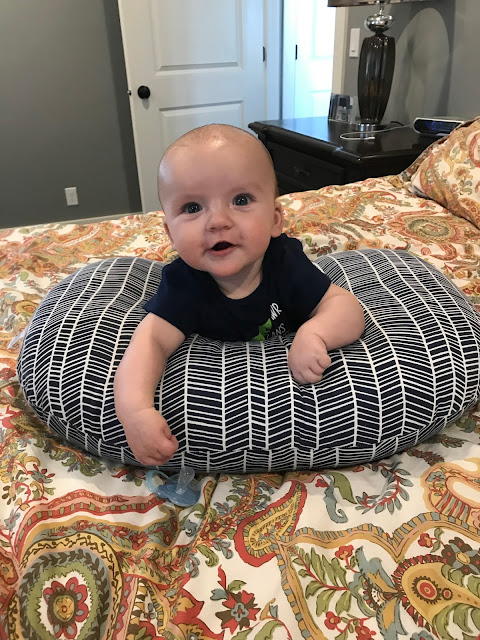 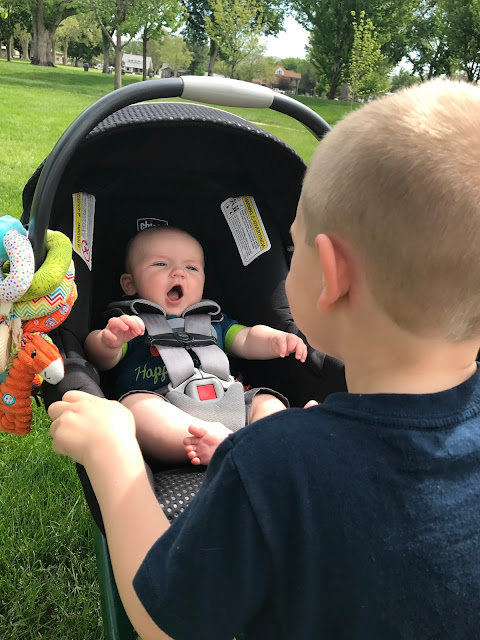 Hates
He hates to be alone. If you leave the room and he's awake he will instantly start to fuss.
He hates to be swaddled.
EATING
I promise you that he hasn't missed a meal. He loves to eat. I'm nursing him 95% of the time. If we leave him with a sitter or grandparent, he will have a bottle with formula. Other than that, he nurses. Occasionally I will make a bottle for him but I prefer when he nurses. I was getting so upset that I wouldn't produce enough to freeze. I hated that he was taking a bottle. And then, my husband gave me the best little pep talk and I'm good with it now. I take it day by day. I'm not going to stress about it. Each month I hope that I can nurse at least one more. :) 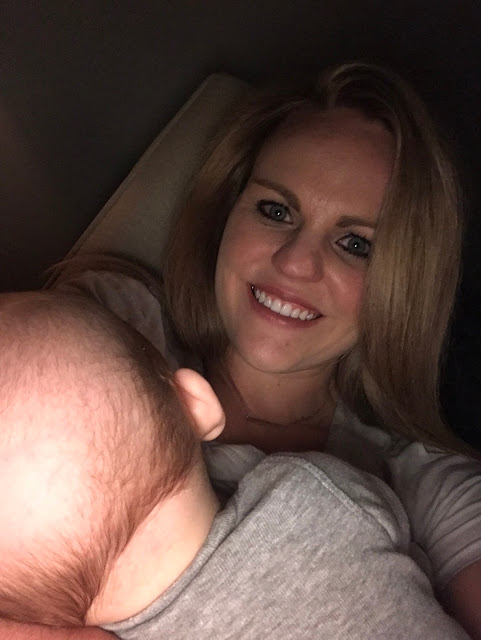 We gave him some rice cereal for the first time the other night and he loved it! Travis couldn't feed him fast enough. 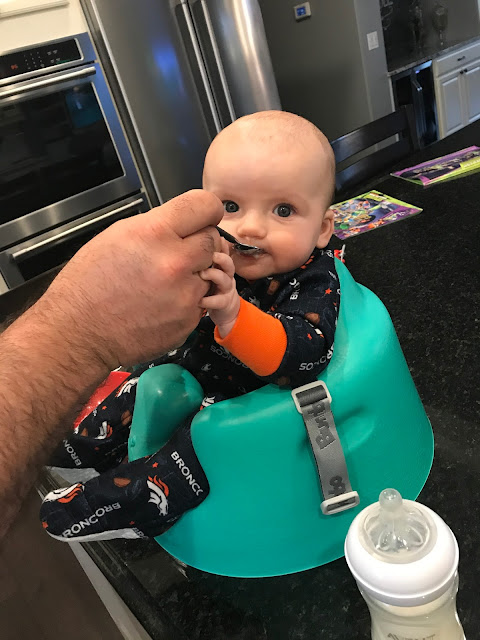 PLAY / DEVELOPMENT
He enjoys playing with the toys that hang from his play mat. And, he's starting to love Sophie, his giraffe. He is constantly drooling and everything goes into his mouth. The spit bubbles are constant. I think we are close to teething.
He has become very aware of his surroundings. He responds and loves to have conversations. He loves sitting up and can roll from tummy to back but hasn't figured out how to get his arm out of the way to roll from back to tummy. He scoots himself using his feet. 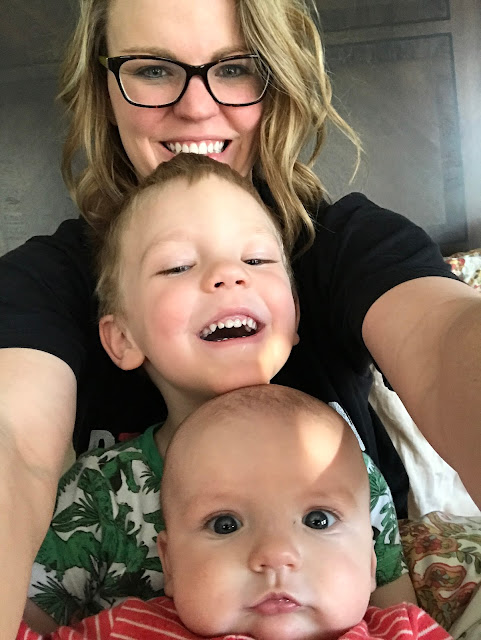 SLEEP
This is a touchy subject. After taking him to the chiropractor, he slept so much better. However, the last two nights haven't been so good. We would put him down between 8 and 9 and he would sleep between 5 and 6. I love it! He sleeps best in his swing. I'm working on naps in his crib so hopefully we can make that transition for good sooner rather than later. 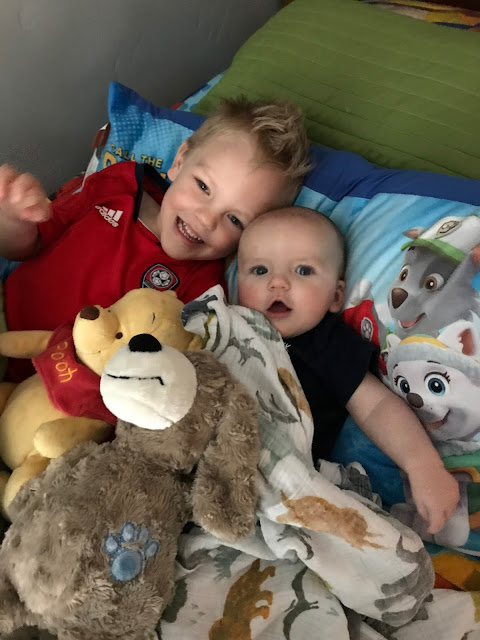 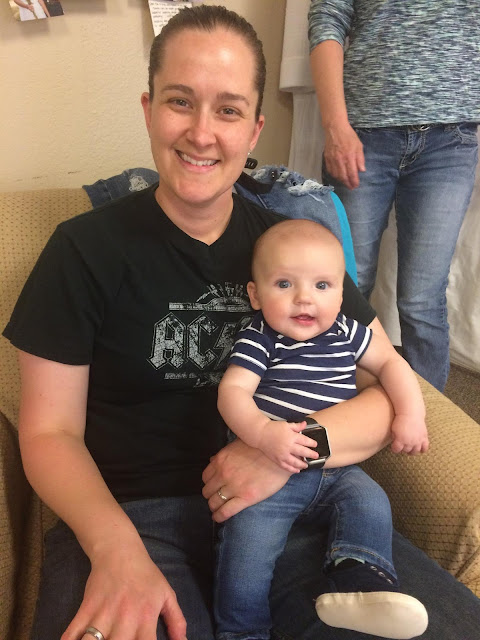 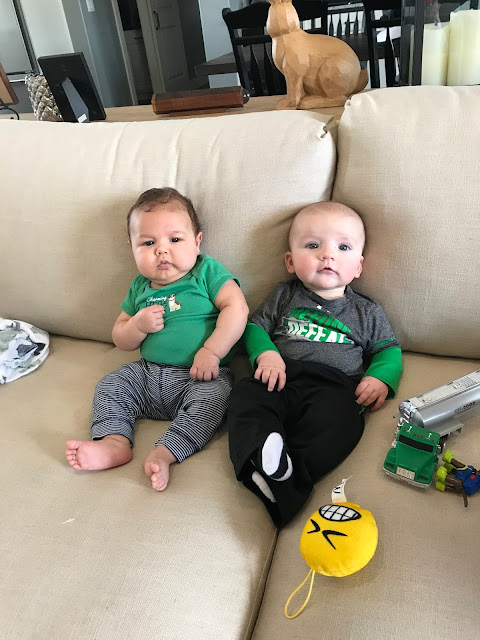 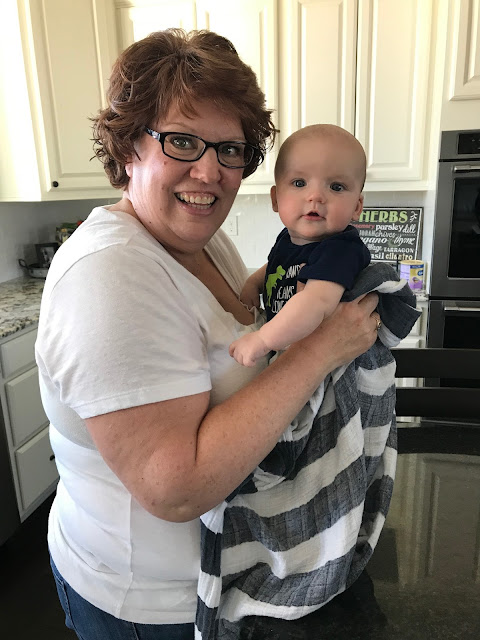 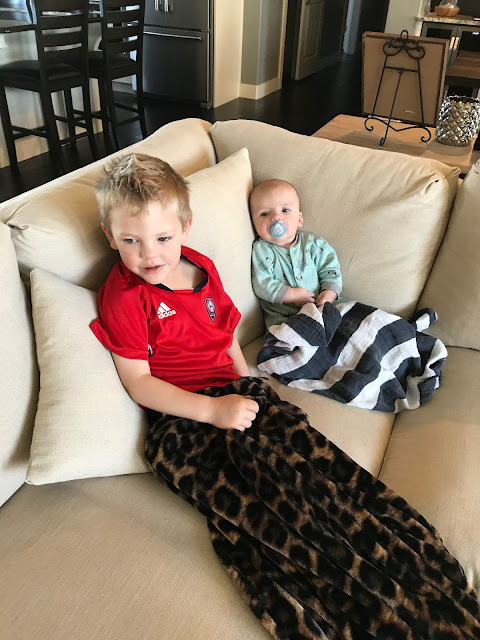 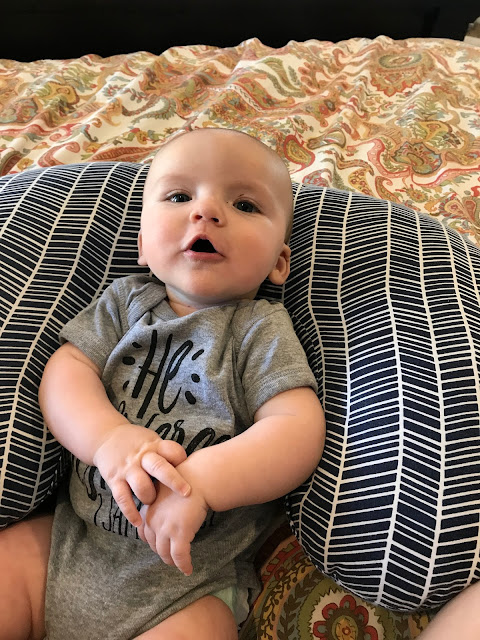 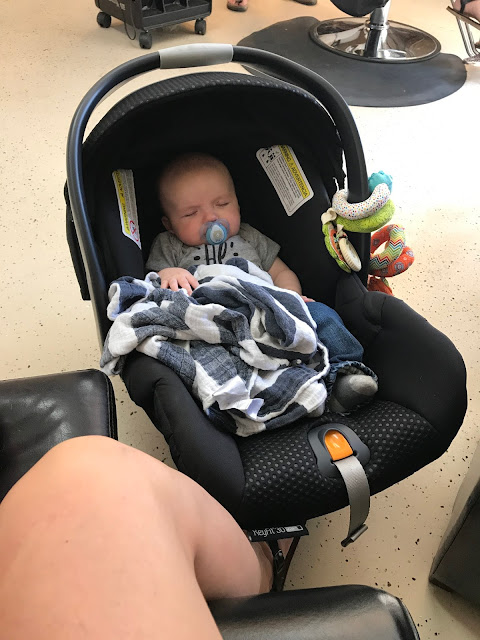 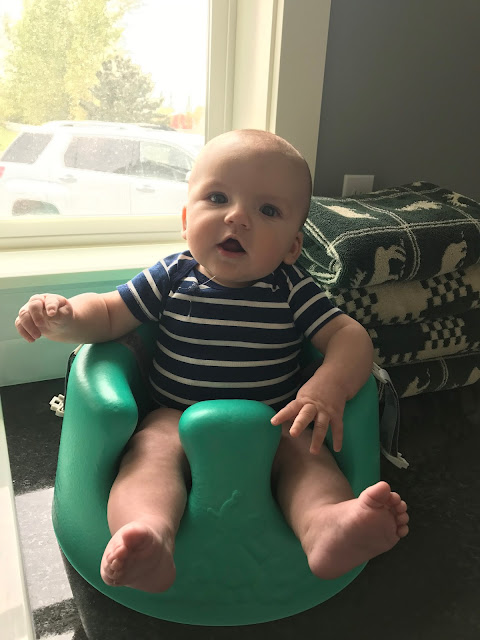 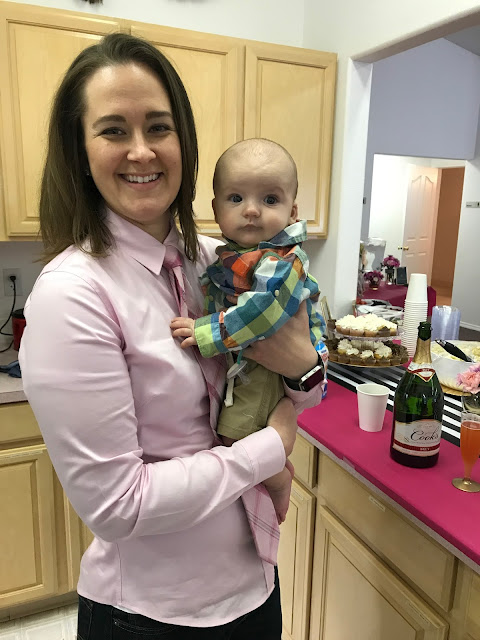 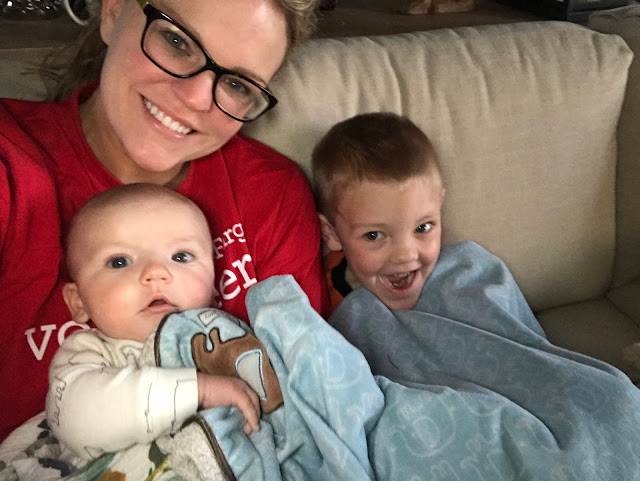 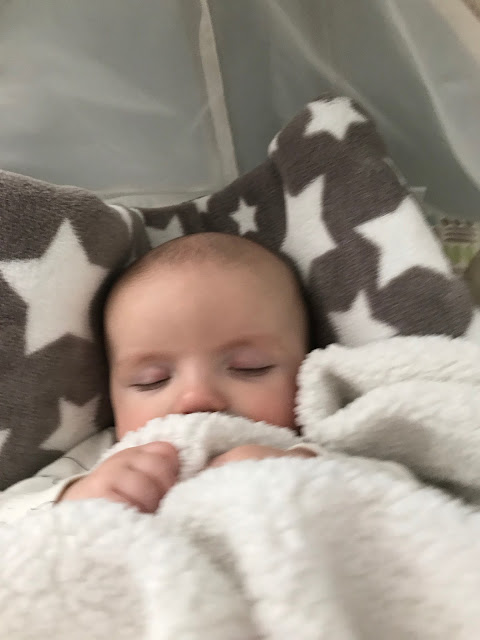 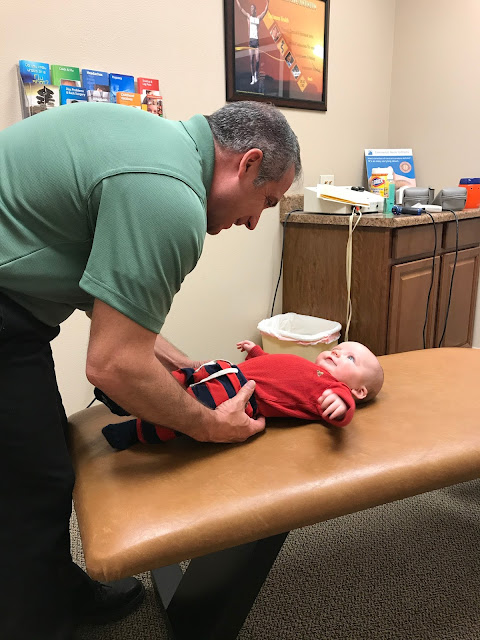 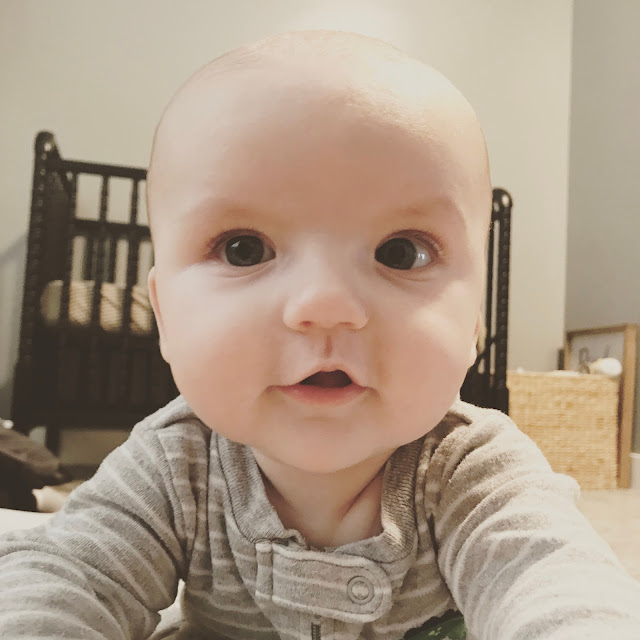 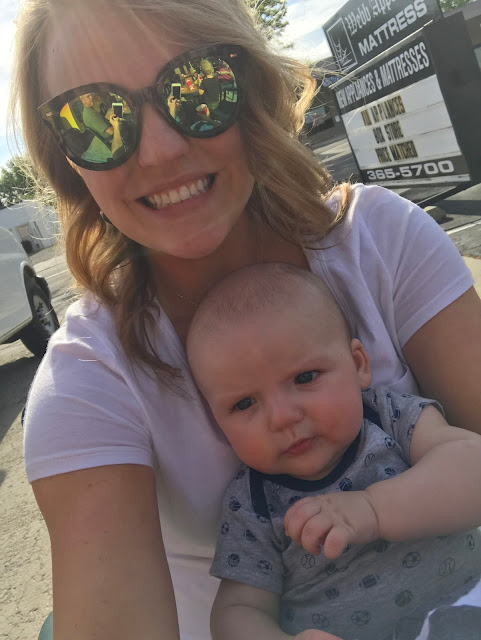 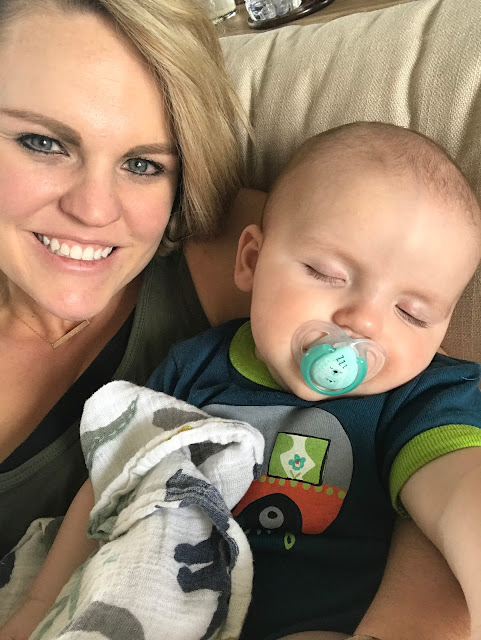 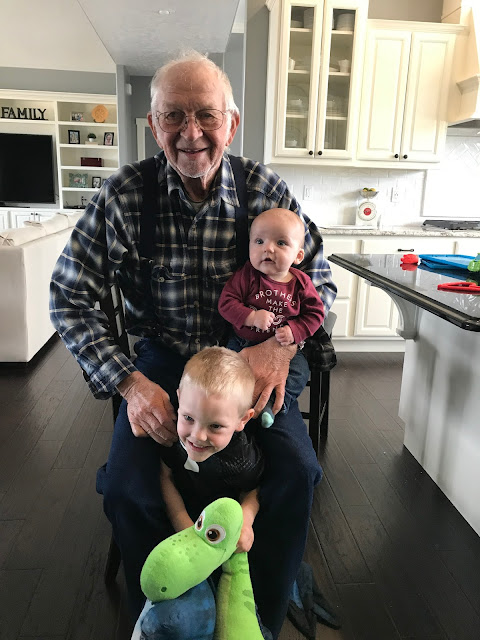 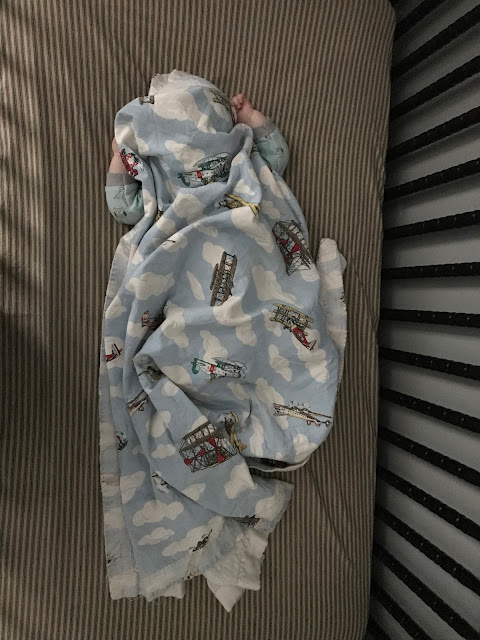 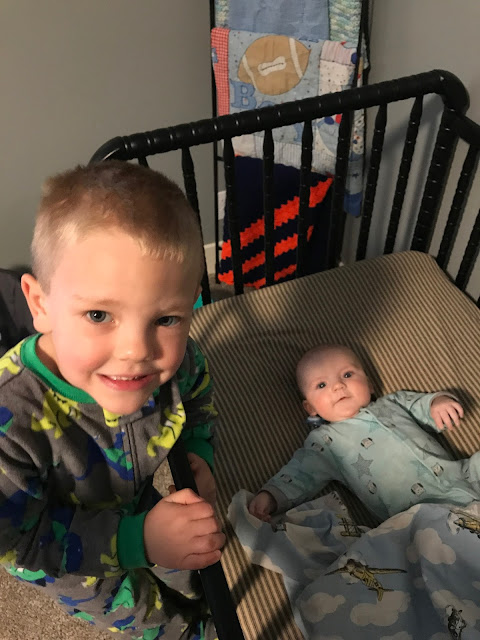 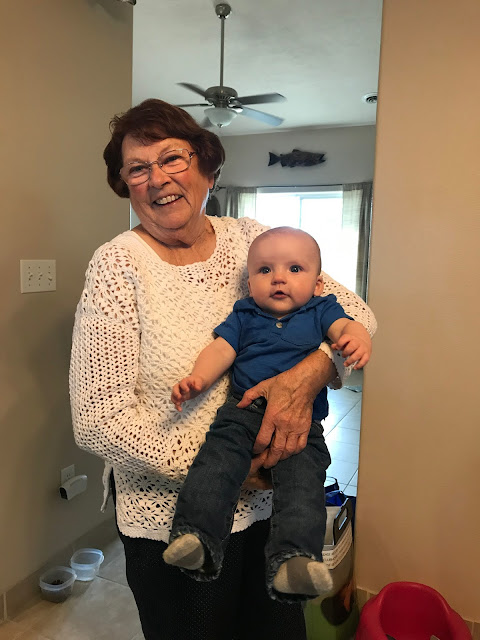 Peyton has brought us so much joy. I love being his Mama. And, I believe Colson was designed to be a big brother! The two of them are obsessed with each other. I'm excited to see what the future brings but I'm clinging tight to the past and the present since we'll never experience the baby stage again and it goes so quickly!
Email ThisBlogThis!Share to TwitterShare to FacebookShare to Pinterest
Labels: Month by Month, Peyton