Colson is one month old! How in the world has four weeks past already? He continues to amaze me of how much he changes everyday. When I look back at pictures from the day I brought him home until now it amazes me the drastic changes.


I love every single moment I get to spend with him from the cry sessions to the moments that he smiles! Running on fumes from lack of sleep is my new normal and if you know me, you would have thought this was impossible. (Crazy how motherhood changes things!) I think in the last four weeks I have had every single emotion consume me. I never thought I could love someone so much or that one person could make me so stinkin' happy! Don't get me wrong...there are moments when I am pure exhausted but those are the moments that I just remember to thank God that he chose me to be Colson's momma! I think it's finally sinking in that I'm a mom, the greatest feeling ever!

Colson doesn't go back to the doctor until this coming week but I'm very anxious to know his measurements! I'll be sure to update you all! He is defiantly filling out! He is officially out of newborn diapers and most of his newborn clothes. When it comes to his strength...well let's just say I'm going to be in trouble! This little man has already successfully rolled over...more than once! He lifts his head up and has great head control for being a month old. He pushes EVERYTHING away when his is throwing a fit. (Yes, that happens!) While we were taking newborn pictures he pushed himself up on his hands and knees and pushed himself out of the basket that was laying on the floor. Needless to say, we didn't get that picture! I'm excited to hear what his doctor has to say about all of this.

EATING
From the time we were in the hospital Colson was great at breastfeeding. He seems to get distracted and likes to eat at his pace (slow) so he pulls off a couple times and I've learned to be very patient with him. I have been pumping after most feedings to keep my supply up since I will be going back to work and want to breastfeed until Colson is a year. Since I am going back to work I have been giving Colson a bottle twice a day. This was rough. He was very fussy because of all the gas he was getting until we finally used the Playtex Nursers. Lifesavers! However, when he takes a bottle he eats about 3-4 oz every 3.5-4 hours. After he eats I try and keep him awake for an hour and a half and then let him snooze for an hour and a half. (during the day) This way, he sleeps longer at night between feedings. I really enjoy breastfeeding and love all its benefits but it's tiring. I had no idea how tired I would be. All the waking up during the middle of the night doesn't help however. :)

SLEEPING
In the first couple weeks Colson would sleep 20 out of 24 hours in the day. He never missed a feeding however! He now spends more time awake and alert during the day. He loves looking around and being talked to. At night he sleeps in my room in his co-sleeper. It just sits right on my bed so he is close to me, which I love. During the day he takes at least one if not two naps in his crib. I want him to get used to being in such a 'big' space. Other times he will take a nap in his co-sleeper or swing. 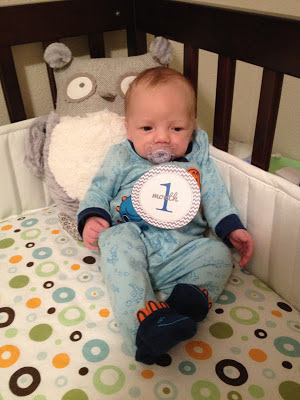