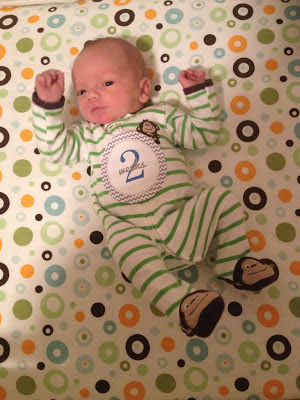 Last Thursday we took him back to the doctor so he could get circumcised and surprisingly he did great. He was a little fussy for a couple days and just wanted to be snuggled but that was just fine with me!

On his 2 week birthday my mom and I measured Colson and he grew 2 inches in length! (Of course this isn't official) We could tell that he had grown quite a bit so we busted out the measuring tape!

Also, on his birthday Colson got his very first REAL bath! He belly button looked great and completely healed so we stuck him in the tub! I knew it was going to be a fight because this little man hates being naked. HATES, HATES, HATES being naked. He screams and lets all of our neighbors know when he is getting his diaper changed or we are changing his clothes so I knew this would be no different. But boy was I wrong!!! He LOVED his bath! He screamed going in and screamed coming out but loved being in the tub! After his bath I did infant massage on him but hopefully he will enjoy that after a few times. The little guy did much better at night and relaxed as soon as I was finished but screamed the entire time I was massaging him. 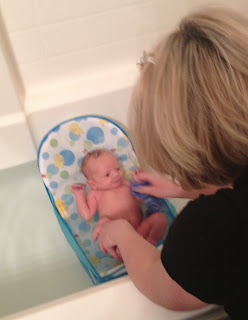 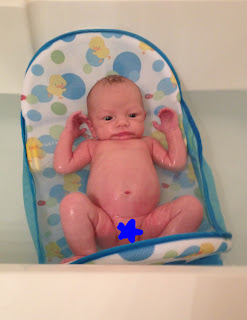