Babies are so unpredictable.
Peyton kept us guessing when he would arrive.
I'd been experiencing contractions over the weekend and I had an appointment with my OB on Tuesday, the 10th. I was hoping that there would be progress since the week prior. So, I walked two miles the morning of my appointment.
At my appointment my doctor said she expected to see me in labor and delivery within 24 hours....
I was having intense contractions after my appointment. However, 24 hours came and went and I was disappointed to say the least.
The next day...nothing. I had a few contractions but nothing that was uncomfortable. They had just stopped!
That night I didn't feel a lot of movement and it was concerning to me so first thing on Thursday I called the doctor's office just to see if it was normal. They wanted me to come in just to double check but didn't seem too concerned. I jumped in the shower to get ready to head over and when I got out I called Travis to let him know we needed to go get checked out.  As he answered the phone...MY WATER BROKE!
The first words out of my mouth when he answered..."ummm, I think my water is breaking?!?"
However, I was determined to finish getting ready before heading to the hospital. I still wasn't having any contractions so I wasn't worried about time.
Travis came home, I finished curling my hair, and tried to convince him we had time to wait for the clothes in the dryer to finish. But...I couldn't convince him of that! :)
Off to the hospital we went. 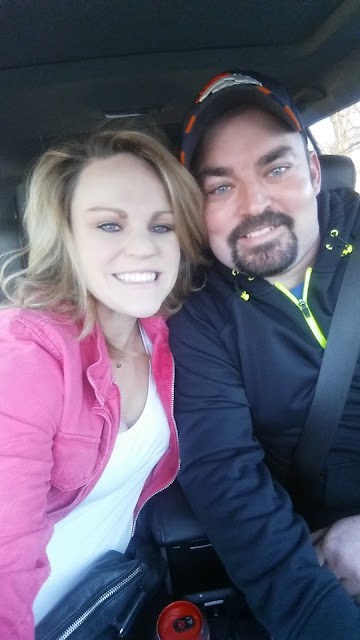 On the way over we were both really calm. We talked about how big we thought he would be, how much hair we thought he would have, and we talked about what to hang in the entry way of the new house. Casual conversations. It was nice.
We arrived at the hospital and got all checked in.
We decided not to waste any time and started Pitocin right away.
Nothing seemed to happen at first... 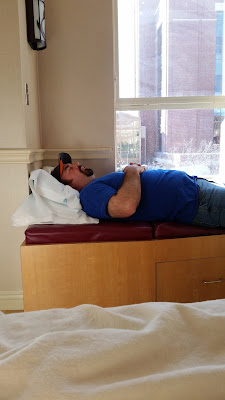 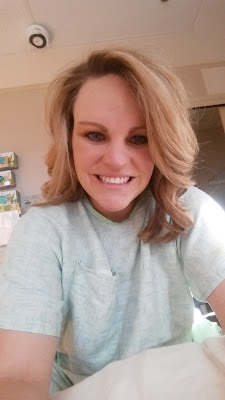 We just waited for the medication to kick in, Once it did, Travis was great with helping me handle the pain. I just held his hand and focused on taking deep breaths. Every time I had a contraction I didn't want to hear any noise.
Once I was dilated to a 6, I asked for the epidural!
The lady in the room next to me was having her baby natural and screaming...I couldn't take it. I wanted that epidural!
Peyton's heartrate started to drop with every contraction that I was having after being on Pitocin for a few hours. So, they had me switch and try every position imaginable to relieve whatever pressure was causing this to happen.
No such luck. My doctor, who was off that day, came in (hallelujah!!!) and checked out the situation. They determined to continue letting me labor and see what happens.
Fast forward 1:30 am on Friday the 13th...
Doctor shows back up and we are ready to push.
An hour later and Peyton still hadn't made his way down to the birth canal. He was still very comfortable where he was.
His heartrate was still unstable.
My doctor told me that she was certain after three more hours of pushing we would still be in the exact same situation. So she recommended a C-section but left the decision up to Travis and I.
3 more hours of pushing with no baby and his heartrate dropping every time I push.....
It was no question. They began prepping for a C-section.
As calm as my doctor and the nurses were, I shouldn't have been scared. But, I was.
I had no idea what to expect. And, I wanted a healthy baby more than anything else.
I was wheeled into the OR as Travis was getting prepped.
My anesthesiologist was amazing. He helped tremendously in calming my nerves. He really made the time seem to go fast as I was waiting for Travis to come in. He also made sure to take a ton of pictures for us during the entire procedure and then sent them to Travis.

I truly felt like I was on an episode of Grey's Anatomy. Everyone was casually talking to each other and laughing. No big deal. However, my doctor was amazing. The time was finally here to meet our boy. I had been anticipating his arrival for weeks and the time had finally come.

Finally, Wallman pulled him out and we heard baby cries!
3:30, the morning of the 13th. He shares a birthday with his Nana.
The nurse took him to clean him up and Travis got to cut the umbilical cord.
They brought him back over to me where I was able to have skin to skin, something I didn't think was possible after we decided on the C-section. I was so thankful!
Finally, we got to meet our sweet Peyton! 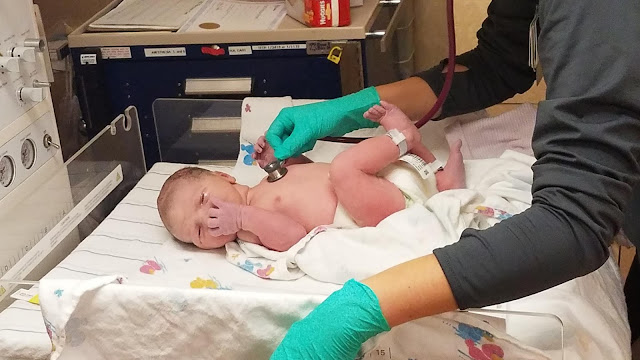 He was so alert. He had his eyes wide open, looking around from the time they first held him up.
7 pounds, 5.8 ounces of sweetness. 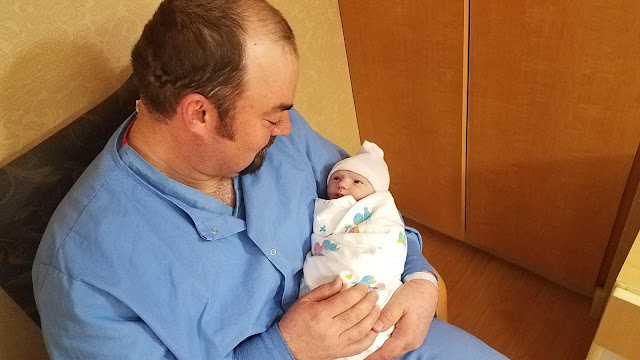 We went up to our room and rested as much as possible that day. We kept the birth announcement  limited until big brother was able to come and meet him! 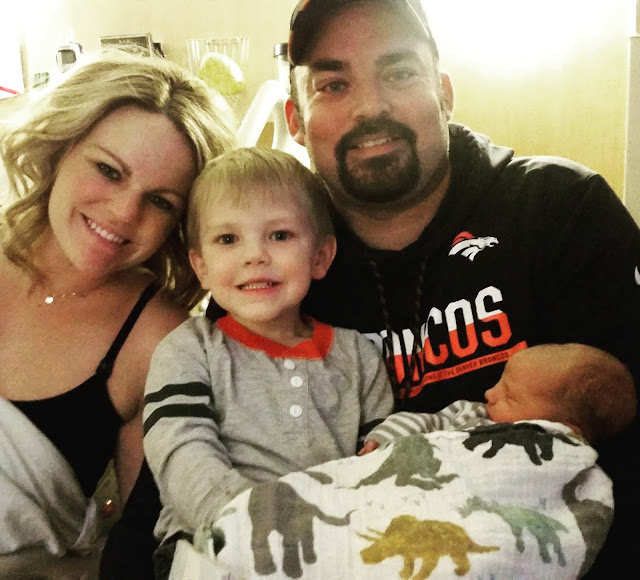 Our family of four! 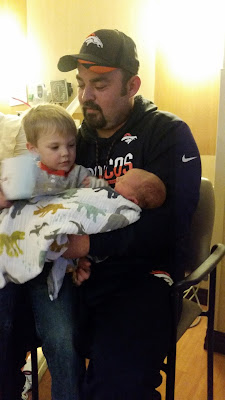 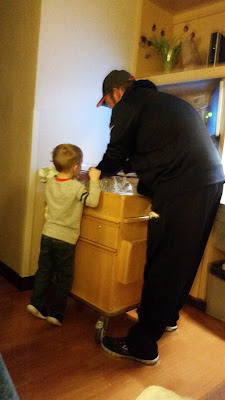 This hospital stay was so much different than my delivery with Colson.
I remember being out of bed the first day and walking around.
This time around, I didn't want to move. However, I wanted to go home as soon as possible.
Friday afternoon, I asked my nurse when I could take a shower and she said as soon as I could walk the halls. As soon as she gave me the okay, I was out of bed and walking the halls.
Next, the shower and getting dressed into my own clothes.
Saturday night, my favorite night nurse did everything she could to get me ready to go home the next day. That was my goal, to go home on Sunday. 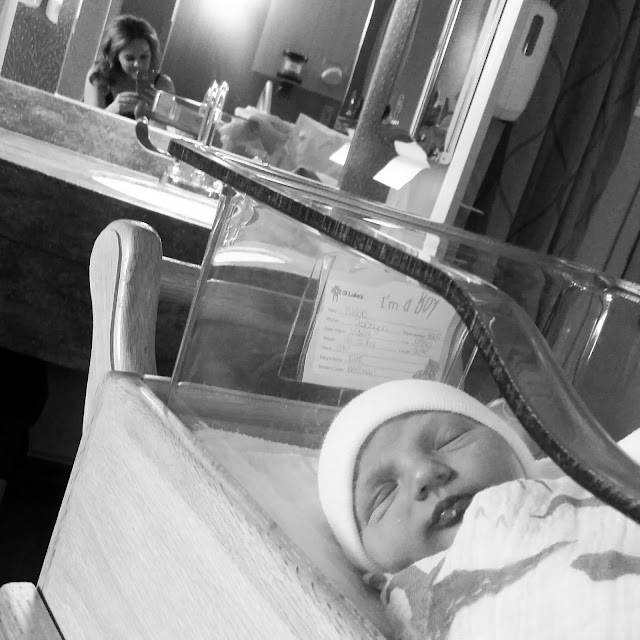 We made it happen. Sunday morning I got up, showered, and ready for the day before the doctor came into see me. She walked in and said, I think you can go home today. I see no reason to keep you! The nurse came in and went over all of our paperwork and sent us on our way! 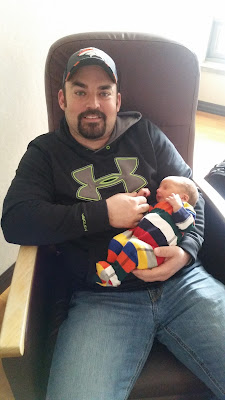 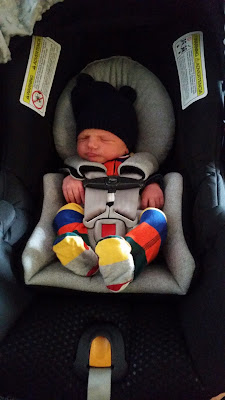 As much as I wanted to go home, I was a little nervous about not having the constant help from nurses. However, Travis was amazing. He stayed home the following two days to help me with anything I might need. He helped day and night. 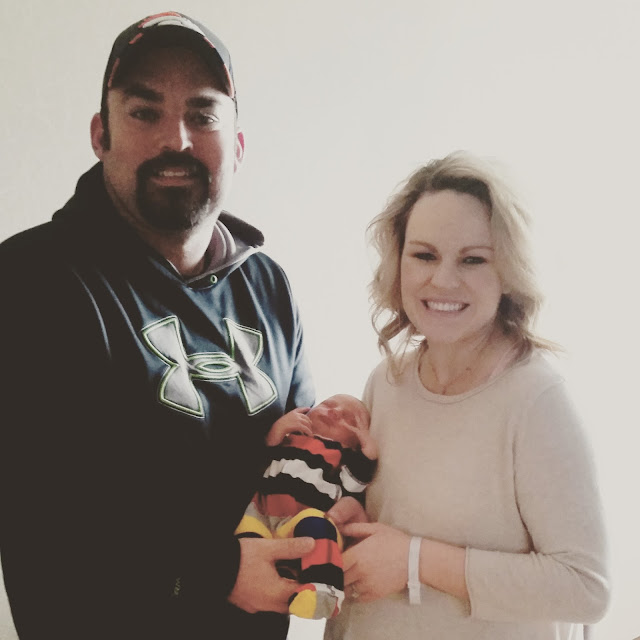 The transition from a family of three to a family of four has been great. An adjustment, that we are all still getting used to but a good adjustment.

I love every second we get to spend together as a family of four. I really couldn't feel more blessed!