Colson woke up Saturday morning after sleeping 10 glorious hours with a mess of a diaper & fussy. I was trying to get ready to go to a bridal shower and that just added to the chaos. Gave him a bath and got him ready to go. We made it to the shower, only 20 minutes late. It was a great shower, celebrating a beautiful bride to be! Colson managed to puke right on my leg while playing a game...thank goodness the majority of ladies there have children. They get it! After the shower we went home and changed into comfy clothes. 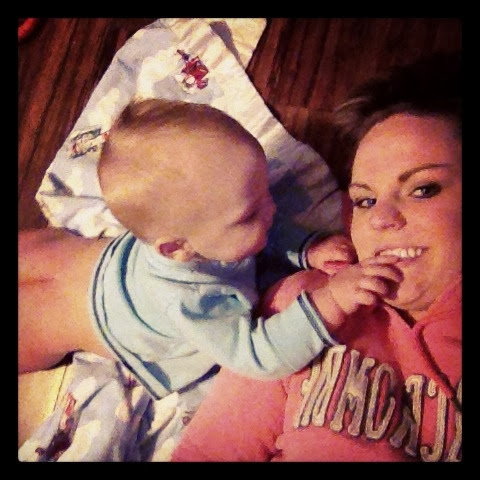 Colson slept most of the day and when he was awake he just wanted to snuggle. There wasn't a toy that he wanted. However, with all the messy diapers we were dealing with some intense diaper rash. We spent a lot of time down on the floor airing out his booty. With that being said, we went through a dozen towels and the washing machine was constantly running. 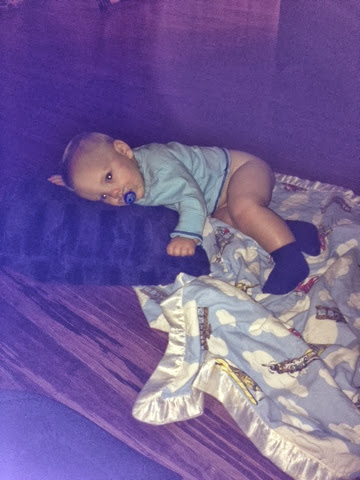 Saturday night he went to bed early. He was asleep at 7 so I put him down. I then woke him up right before we went to bed at 11 to change him and give him a little bottle, hoping we would avoid another morning like Saturday. However, it was pretty much a replay. He did sleep through the night though. He was really fussy and wanted to be held all day. So that is what we did. Nothing other than snuggle. Last week I thought I would try switching him from sensitive formula to regular formula......so Sunday, he got sensitive formula. I fell asleep with Colson and took an hour and a half nap with him. This NEVER happens. My child doesn't like to sleep next to anyone. He likes to move and have his space. I so enjoyed this little nap. Anyways, it was a perfect, lazy Sunday. We watched movies and relaxed. Sunday evening Colson was acting like his old self so I tried giving him some food.....half way through I could see it in his eyes and hear his little tummy rumbling. And the next thing I knew vomit was everywhere; on me, on the floor, all over the highchair, all over Colson, and then all over Hans' paws because he felt the need to walk through it. I stripped Colson, grabbed Hans and washed his paws off while both of them were crying, started a bath and let Colson soak for a good 20 minutes. He went down without a fight and slept for four and a half hours before waking up and joining me. He tossed and turned the rest of the night and was awake several times. He seems to be doing much better today but I'm praying this was all caused by switching formula and teething. I hate having a sick baby. 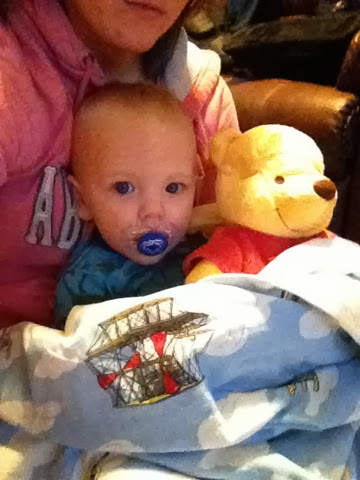 I'll spare you the pictures of the not fun scenes from the weekend!
Email ThisBlogThis!Share to TwitterShare to FacebookShare to Pinterest